Inauguration week in the United States this year carried with it a host of powerful expectations. From election challenges to pandemic memorials to threats to the historic swearing-in of America’s first female Vice President, this year brought many historic moments.

And yet, the photo that stole the show wasn’t of Michelle Obama’s purple pantsuit, or the striking ensemble of inaugural poet Amanda Gorman, but instead a quick snap by former sports photographer Brendan Smialowski. He took a photo of Bernie Sanders, bundled up against the frigid day in a blue surgical mask, a Burton Gore-tex hooded jacket, and a pair of striped brown mittens knitted by Jen Ellis, a second-grade teacher.

No one expected the photo to go anywhere. In fact, the photographer admitted he was just jealous of Bernie’s mittens. Yet, as we all know, this singular be-mittened Bernie image is now an internet sensation. Sanders’ terminally bored-looking visage has appeared in famous works of art and iconic photographs, and beside celebrities in movie and TV scenes. He’s ridden mass transit, attended sporting events, and popped up amongst many Pacific Northwest landmarks. Publications have even tried to find a deeper meaning in the mittens.

SnowShoe saw the Bernie meme in a different light. Today, biometric systems that use facial recognition and fingerprint recognition are pervasive across federal installations, along with smart credentials. Yet in this instance, Bernie’s covered face and hands might render biometrics ineffective, and with his bulky mittens, he might not be able to retrieve his secure senate ID!

Our engineering director Alex Haines pointed out that Bernie instead could use the unique SnowShoe system to securely access a government location, even with full coverage of all his biometrics. It might be useful to know that SnowShoe captures a unique and fraud-proof login event through proprietary technology. One touch to a smartphone screen is all it takes to log in securely and validate a person’s presence.

We can’t tell you if SnowShoe technology was used during this event by the federal government to secure the Capitol (the details of federal security are protected by statute), but we can tell you that Bernie’s site login (even with a mask and those amazing mittens), would have been 100% safe and 100% protected by SnowShoe’s proprietary algorithm and enterprise-class security system.

If you’d like to know more about the unique security SnowShoe can provide for identity and access management, check out our product videos, and contact our enterprise sales team here.

Although we love the Bernie meme, we probably won’t be featuring Bernie on our product branding. However, we are excited to see that our startup community in Portland has been actively placing the Bernie meme all across our fair City of Roses.

For your amusement, we’ve included a set of local Pacific Northwest Bernie memes below. We’ll add more as we receive them this week—send ‘em over and enjoy Bernie in Portland! 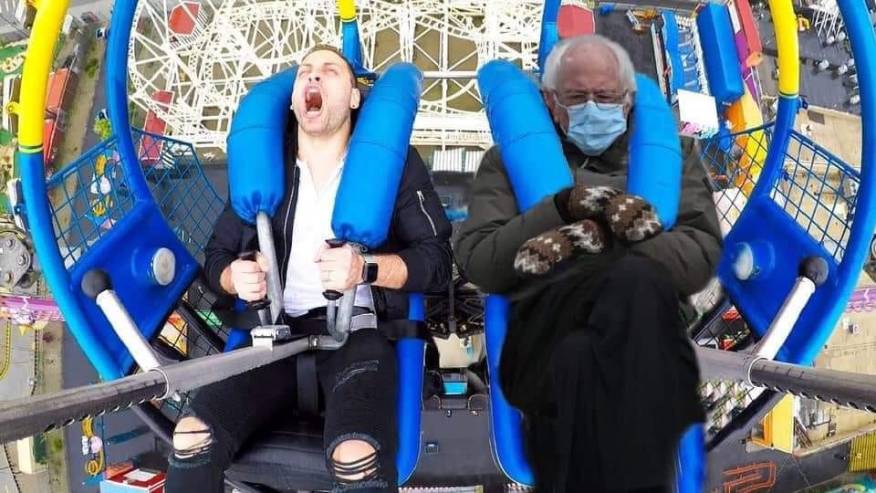 Who knew Bernie was so involved with DEQ?

Here he is working on a spill cleanup project near North Santiam River. So helpful! pic.twitter.com/0W19fgadGV

Bernie's mittens are working overtime on this cold, clear day at Cully Park. This is is a great example of a community-led and DEQ-supported brownfield redevelopment in NE Portland. #MaskUpNow #PhysicallyDistance pic.twitter.com/YBn79n852F

Bernie likes to check on #cleanup of the McCormick and Baxter site in North Portland – just making sure its protective cap remains in good shape to safeguard people and #wildlife. pic.twitter.com/T3pCtgU3hm

He was a big fan of designating Crater Lake an Outstanding Resource Water – he hikes there All. The. Time. #waterquality pic.twitter.com/1tBv3Hdyjv

So glad Bernie was there to help us get the Tug Nova out of the Columbia River near @UmatillaOR last February.
Big job! pic.twitter.com/wbQW7jv2cP

If you can this weekend, get outside and enjoy Oregon’s beauty. Just like Bernie does. #SmithRock pic.twitter.com/lgOlYgfstr