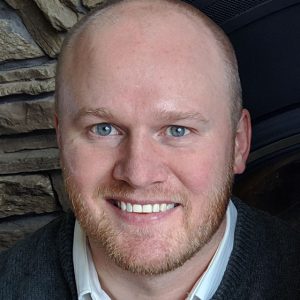 If there is one person who could be considered the anchor of the SnowShoe team, it just might be Chief Operations Officer, Sheradyn Mikul. Sheradyn joined the ShowShoe team back in 2012 when he was hired as a UI/UX designer. He has held many positions at SnowShoe since then, entering his current role as COO in 2017.

Sheradyn’s background is in design. He graduated with a degree in landscape architecture from the University of Wisconsin-Madison. Upon graduating, he moved to the Bay Area to work as a landscape architect at SWA Group for two years. Eager to get back to the Midwest, he moved to Chicago and worked as an interactive designer at NogginLabs, an educational software company.

In 2012, Sheradyn moved back to Madison, WI where he joined SnowShoe. The following summer, the team relocated to Boulder, CO to participate in Techstars Boulder Accelerator program. The summer program led right into a busy few years for Sheradyn as SnowShoe’s sole designer. The company had acquired more than twenty 3D printers to keep up with orders, and Sheradyn was the one-person team responsible for production, fulfillment, and design innovation. His new designs helped lead to the company’s acceptance into the Disney Accelerator program the following summer.

In 2016, Sheradyn stepped into the role of interim CEO, securing interest and investment from the Winshall Group. The dedicated team of key stakeholders embarked on a CEO search and advanced the company’s manufacturing process, including forming a new partnership with a manufacturing team in China.

As COO, Sheradyn continues to wear many hats and keep operations running smoothly. His role oversees the accounting department, human resources, licensing and customer agreements, and patents. Sheradyn also remains SnowShoe’s lead website designer and developer for both our consumer-facing website and backend user experience for clients and customers. As he says, this company and his role encompass his various passions for technology, design, and product work.

Sheradyn’s philosophy: Learn as you go.